A village in the Finnmark, once producing bar iron and pig iron for export. 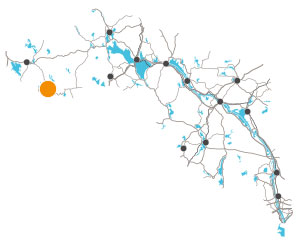 In the early 18th century, there was a serious shortage of wood in the Bergslagen region, which was needed as fuel for mining and the ironworks. Sebastian Grave (1684–1748) was a pupil to a prolific and eminent inventor, Christopher Polhem, who had conceived many important advances in mining technology. Influenced by the master, Grave broke with the traditional practice of siting smelteries and ironworks close to the ore-rich hills—he sited them instead where there was good access to timber and water power. So new works were established at Gravendal, Fredriksberg, Annefors, Tyfors, Ulriksberg and Strömsdal. This also brought the Säfsnäs community into the Bergslagen region, and for 200 years it was a thriving works town.

The Gravendal ironworks was named after its founder, Sebastian Grave, who in 1720 discovered the site at the mouth of the Skärsjön river, which dropped 30 metres over a distance of just one kilometre. The water provided power for the saws, the mills and forge hammers, and the nail and plate works. Later on, a second forge, known as the Stensmedjan, was built for the manufacture of bar iron for export. A rolling mill was added at the end of the 19th century. The Stensmedjan forge was demolished in the 1930s, but a reconstruction was made of the hammer, complete with water-wheel and axle-bar. In 2003, a new German furnace was commissioned. The works can be seen in operation during the opening times in the summer.

The nailworks and the forge-workers’ rest room at the works have been preserved, as have the manor house, workers’ quarters and dams. You will also be able to see the ruins of many other ironworks.