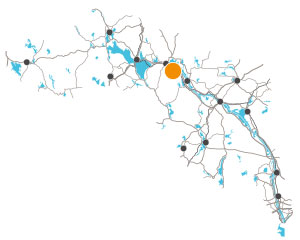 The village of Flatenberg is named in records dating back to the 14th century. A smelting house was built there by homesteaders in c.1600, and was in an excellent position thanks to being on the shore of lake Norra Barken, which could be used by people and to ship goods all the year round.

The existing blast furnace was built as an extension to the old one from 1865, at which time a number of improvements were made. These included the erection of a modern roasting house and a steam machine, enabling an annual increase in output from 1,600 to 3,000 tonnes of pig iron.

Several old machines can be seen in the machine shed, including an ore crusher and a blower. Like many others, the smelting works was hit by the depression that occurred at the end of the First World War, and it was closed down in 1918.

However, by the 1920s the site had already generated a great deal of interest and much of the history had been documented. Author Karl-Erik Forsslund believed that this homesteaders’ village was the most remarkable site in the country.

When the smelting works was scheduled for demolition in 1930, Forsslund was fortunate in getting the works listed as a museum, as it contained a large collection of tools and implements—as it still does today. Thus, this historic site was saved, although some parts, such as the charcoal stores and parts of the homesteader village, were lost.

A path runs round the site, and a number of viewpoints are indicated along the way, with some old photographs showing what the works looked like in 1915.