Flogberget mine. Open-cast mine drained by underground tunnel. 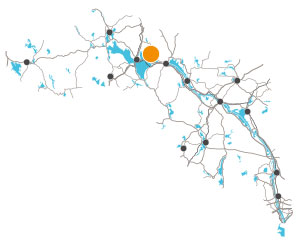 Flogberget, which was opened back in the 17th century and comprises some 15 mine holes, is one of the most fascinating mining areas in the country. The mines are located on the top of a hill and are mostly drained by an underground tunnel. This is an ingenious method, as mining can be carried out without the need for drainage pumps.

Three contrasting mining methods can be studied here. The oldest method was to pile wood against the rock and set it alight. This made the rock brittle, enabling it to be broken free by means of crowbars and sledge hammers. In the 18th century, gun powder was introduced to break up the rock, followed by dynamite in the 1870s.

The beginning of the 20th century saw the introduction of electric power, and mining work took on a larger scale. A crusher and an ore-dressing plant were installed. These machines crushed and separated the coarse ore into fine-grained dressed ore which was mixed with water. A brick press compressed the wet ore into small pieces, which were then turned into briquettes in a furnace that was over 50 metres in length. The briquettes were conveyed by cable-way to Hagge station and thence by rail to the blast furnace.

The method was invented by Gustav Gröndahl and only the ruins now remain on the slope down to lake Leran. The mine was closed down in 1918 because of the depressed economic climate that prevailed at the end of the First World War.

An exciting exploration trail leads from the old, flooded Stora Flogbergsgruvan mine opening down to the dry open-cast mines, that are linked together by “galleries” or tunnels. You can even visit underground mines.

Alternatively, you can follow Flogbergsspelet, a dramatized tour by artistes in period costume, which takes place in the summer. The programmes for children at Flogberget are extremely popular.

During the 1990s, a miners’ hut was erected adjacent to the mine hole. It is primarily used for meetings by a local heritage association.

According to Swedish folklore, the word, floga, refers to “sea fire” (phosphorescence) that comes from the mouth of a flying dragon. Many people believed that wherever this is seen, a rich seam of ore is to be found. 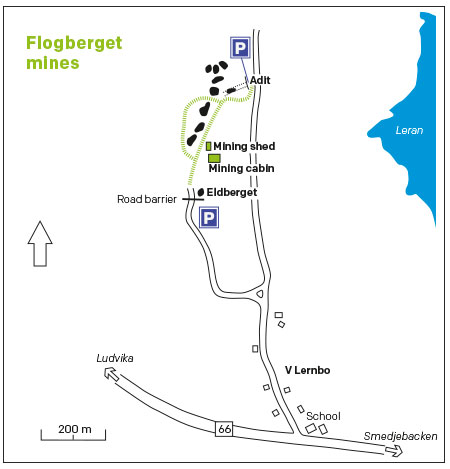