Strömsholm castle, baroque from 1670, belongs to the Swedish Crown. 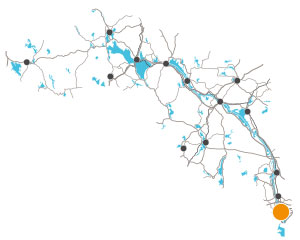 In the 1550s, King Gustav Vasa built a stone house on a small island where the Kolbäck river runs into lake Mälaren. After the king died, his widow, Katarina Stenbock, took up residence there. In 1654, king Charles Gustavus gave the estate as a gift to his queen, Hedvig Eleonora, who engaged an architect, Nicodemus Tessin the older, to build a new palace there. Work started on this French baroque-style building, with its characteristic four corner towers, in 1669. The queen also had a number of other buildings constructed to the west of the palace, one of which, the inn, is still to be seen there. It serves as an excellent example of the timber buildings of that period.

At the same time, a number of parterres (formally patterned flower gardens), avenues and orchards were created. The gardens were redesigned on several occasions, most recently by Carl Hermelin in the 1930s.

Since the palace was used only by the royals as a summer retreat and for occasional overnight stays, the interior design was kept relatively simple. Much of the present design was created by king Gustav III and queen Sofia Magdalena. The furnishing and design of the stateroom on the first floor was never completed.

An eminent architect, Carl Hårleman, designed the palace chapel that was built in 1735–41. Since the chapel was designed to occupy the centre of the building, the dome rises up between the corner towers.

There has been a stud farm at Strömsholm since the 16th century, and the Riding School of the Swedish Army was there for about 100 years from 1868. Many majestic stables can be seen on the hill close to the main road. The Strömsholm area is also a nature reserve that continues down towards lake Mälaren. The forest is full of noble deciduous trees, and there are meadows replete with wild flowers, birdlife and many rare insects.

In the old stone kitchen in the palace grounds is the Strömsholm café, which is open during the summer.