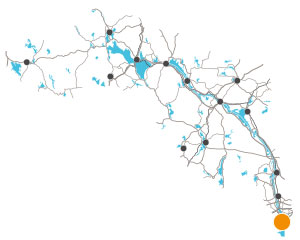 Borgåsund lies at the estuary of the Strömsholm canal, where it flows out of a northerly bay into lake Mälaren.

There has been a bridge across the narrow sound here since medieval times. But with the construction of the Strömsholm canal, this area, which lies between Västerås and Köping, took on a new strategic importance thanks to its harbour and wharf. To compensate for the loss of taxes for these towns, which were also responsible for the shipping on the lake, a weighing house for iron was established, with the money taken being split between the two towns. The weighing house was demolished as recently as 1967.

For a long time, Borgåsund was the largest harbour on lake Mälaren, and it grew into a community in its own right. Accommodation was built for ships’ skippers, harbour workers and the master of the weighing house. During the 19th century, Borgåsund was a busy place with shops, an apothecary (pharmacy), a tavern, a poorhouse and a mission. However, when the decision was taken to run the railway across the sound to Eskilstuna, parts of the community had to be pulled down. As the traffic on the canal had already started to decline, the two towns, Västerås and Köping, decided in 1929 to withdraw from their involvement in the harbour.

Because of its confined location, the community at Borgåsund is very like the fishing villages on the west coast in Bohus. Part of the harbour has been preserved and serves as a harbour for tour boats and pleasure craft. Among the older buildings that remain is the iron warehouse of 1872, and a tollhouse cottage from 1861. Information on the Strömsholm canal is available in the old warehouse.