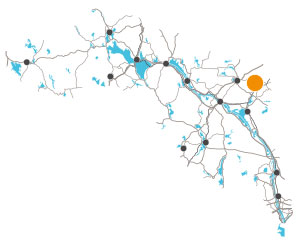 Already in the 12th century there was an iron making site at Olsbenning .Archaeological findings indicate that iron was made here in a blast-furnace. Since then various blast- furnaces have been in use until 1874.

The iron was made by peasant iron makers. The location by the stream supplied water power for the smelting house and nearby the iron makers built their houses. The farmland surrounded the village and on the outskirts were the woods which supplied the charcoal required for running the blast-furnace.

The homestead iron makers produced iron here in increasingly bigger smelteries until the middle of the 1800s.

Some of the homesteads have been moved out of the village, but quite a few still remain in its nucleus. Farming keeps the landscape as open as it has been for nearly a thousand years.

In the vicinity is Lapphyttan, another site where iron was produced for a period of 200 years until the middle of the 14th century. Extensive excavations have yielded new knowledge of what smelting houses of the Middle Ages looked like and how they were used. The New Lapphyttan at Norberg is a reconstruction.