The Engine Shed and the KURJ Railway. 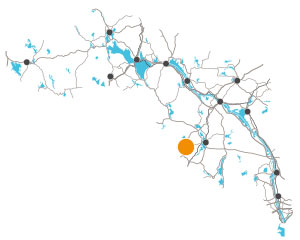 A railway was required for the heavy transports from mines and iron works to the Köping harbour at lake Mälaren. The railway was ready in 1866 and a few years later extended to Riddarhyttan. The last passenger train was sent off in 1952 and the goods traffic stopped in 1968.

When the engines were ordered some mistakes were made measuring the track gauge and the delivered engines had a 1093 mm gauge (3.59 ft) instead of the intended 3.5 ft. To fit the engines tracks and the wagons had to be reconstructed to the 1093 mm. gauge.

Right at the very top of the tower is an exhibition about the railway and the industry at Riddarhyttan.