Primitive blast furnaces from the Iron Age 1 500 years ago. The ore came from the lake. 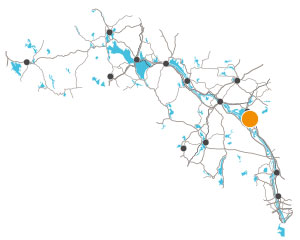 The two pit furnaces at Dunshammar, two kilometres south of Ängelsberg, constitute the oldest link in the 1,500 years during which iron has been produced in the region. The furnaces have been well preserved and the site is one of only a few where Iron-Age pit furnaces can be seen in their natural setting. Several other pit furnaces existed in the bays on the eastern shore of lake Åmänningen during the Iron Age. The people lived just back from the shore, and Iron-Age graves have been discovered near Västervåla church and at Virsbo, 8 km to the south.

The furnaces, made of stone and sealed with clay, were created in pits, and bellows were used to blow air into the furnace. The ore was brought up from the bottom of the lake using boats or rafts in the summer, and through holes made in the ice in winter. The ore from the bed of the lake was rich in iron, having a concentration of some 60%. However, it also contained phosphorus, which makes the iron hard and brittle. Once the iron had been brought up from the lake bed, it was roasted to remove the moisture and any organic material. When the bellows were operating, the temperature in the furnace reached about 1100°C. The slag ran down and settled out on the bottom of the furnace, while the iron solidified into a lump on top of the slag. Because of the relatively low temperature, the iron had a low carbon content and could be forged straight from the furnace. Most of the phosphorus was carried away in the slag.

Two archeological digs have taken place on the site, one in 1969–70, and the other in 1985. The age of the furnaces, determined by radiocarbon dating (C14), was found to be AD 300–800. An estimate was also made of the amount of iron produced over the centuries, and this turned out to be six or seven tonnes.

As well as the two well-preserved pit furnaces, there are also a charcoal-burning stack and three large slag heaps on the site. Around the furnaces are hollows that were created when clay was dug out for sealing the furnaces. The local heritage association at Västervåla has established a small museum in which the ancient process of producing iron is depicted in words and pictures.