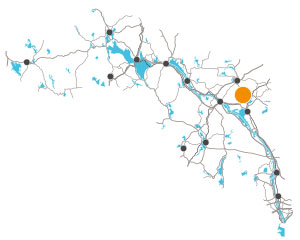 In spite of a very interesting early history, Högfors’ claim to fame lies in an imposing and relatively new blast furnace relic. The plant was built in 1915-1916 and was in operation until 1953.

The two tall brick furnace shafts and the foundations remain today. In the stream the remains of the water pipes leading water to the water wheels can be seen. In front of the manor stand three pillars of slag stone – what remains of the track conveying ore to the sintering plant adjacent to the blast furnace. Opposite the manor there is an impressive stable with a coach house that was erected in 1809. A little higher up the hill stands the steward’s residence, dating from the latter part of the 18th century.

The charcoal sheds have been pulled down at most ironworks in Bergslagen. At Högfors however the shed has been preserved. It was built at the same time as the blast furnace about 1915. The shed is an impressive sight with its length of 150 metres. A rail track used to lead from the southern end of the shed to convey the charcoal to the blast furnace.

The name Högfors (High falls) probably originates from the fact that the river here forms high waterfalls and rapids, utilized since Middle Ages for iron production. The nobility owned the blast furnace in 1464 and as early as 1545 king Gustaf Vasa granted a licence to establish one of the first German type refining forges. In the 18th century the works were taken over by renowned ironmasters. During the latter part of the 19th century, a joint company was formed. The remains of early 20th century industrial buildings to be seen today date from the time when the works were owned by Avesta Jernverk (later Avesta Sheffield).

On the other side of the falls stand a red timber barrack, an accommodation for the workers. Each family had one room and a kitchen. A visit at Högfors today hardly gives the impression that a whole industrial community once existed here, but around 1950 there was a hive of activity. At its height, around 250 workers were employed.