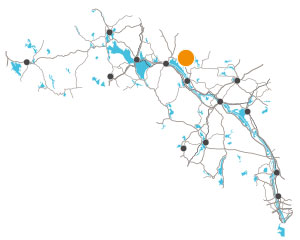 The homesteader villages of Stimmerbo and Torrbo are close to the east shore of lake Norra Barken, not far from Smedjebacken, and are fine examples of the villages that were so distinctive of the homesteaders’ way of life.

Torrbo is mentioned in 1459 as “Torbiornaboda”. Stimmerbo was known in the 16th century. The main street is designed with a long row of terraced cottages. It is situated on a high plateau, which is used for arable farming. Below is the Stimmerbo river valley and the entire area is surrounded by forest.

The modest blast furnace is close to the waterfall to the north of the village. The blast furnace was blown down in 1873 but was converted into a lime kiln, which explains how it came to be preserved. Other buildings, such as the charcoal store and roasting house have been demolished. Below the dam is the water mill and the miller’s house, both of which are built of slagbrick. Across the river is the Stimmerbo sawmill.

There are two principal residential areas: housing for the workers in the north of the village, close to the works, and the more-imposing homesteads grouped around the farmyard. Here, too, are the outbuildings, attic quarters, cowsheds, stables, coach houses and brewery. The original buildings were single-storeyed, but a second storey was added during the 19th century in accordance with the latest vogue among homesteaders.

The two villages are both typical iron makers villages, where the farming and the iron making went hand in hand. The villages shared a blast-furnace, a saw mill and a flour-mill. Several communal buildings sprung up at the turn of the century, including a school, a mission house, a home for the elderly, and a general community centre. The village shop was located in the neighbouring village of Torrio—also the home of writer and poet Verner Aspenström.