The Old Norberg and Engelbrekt – a large village from the 14th century. 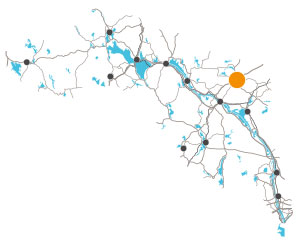 Norberg is called village by its inhabitants but resembles a town of the Middle Ages. The place has for a long time been the main village in the district but never a town. This was the place for administration and commerce in the Norberg iron making district and mentioned early in Swedish history. The iron making was significant for the development of Sweden.

In the 15th century Engelbrekt of Norberg was the leader of a great uprising against the king and the bailiffs For a period of time he was the regent and leader of the Swedish parliament. Engelbrekt is of great symbolic importance and in this part of Sweden his name appears in many contexts.

Along the stream through Old Norberg there is a sign-posted walking-path. In this part of the town there were magnificent iron makers houses, With names which still live on. The buildings have been replaced by a younger type of iron makers housing, also worth seeing. The church dates from the !4th century and had an earlier predecessor in the same place.