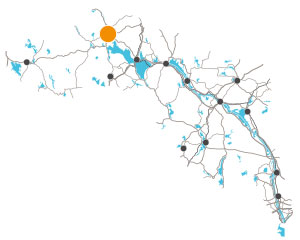 The village of Kyrkbyn in Grangärde sits on a promontory between lake Bysjön and lake Björken. The imposing church (which gives the village its name) is evidence that this was once at the centre of a homesteaders’ village. The church, built in the 15th century, is the oldest building here, in a village that occupied a strategic position in the days when most transport was by water—there is a system of five navigable lakes here. There are also two splendid harbour warehouses, that were built of slagbrick in the mid-1800s.

The village is home to several well-preserved homesteads, a manor house and a “vicarage” or home of a rector. There are also two market places that add to the charm of the village. The market close to the church is surrounded by shops, whilst the other served as the administrative centre of the parish, together with an inn which also served as a courthouse (until 1906) and as a meeting place for the parish council. There is also a village hall, built in 1924 in a strictly authentic style. Inside there is a large mural painted by Nils Öst. Adjacent to the hall is the Finnstugan, a building which offered overnight accommodation to Finnish settlers when visiting the church.

The tourist hotel on the bank of lake Bysjön dates from the end of the 19th century, and is still open to travellers.

To the south lies Kaplansgården, a farmyard built on the site of a smelting house on the banks of the small sound between lakes Bysjön and Björken. The remains of a stone-age settlement and burial ground can be seen on the Korsnäs promontory on the west bank of lake Björken.