Bränntjärn cottage, the home of a widow and her five children,
the grandmother of the poet Dan Andersson. 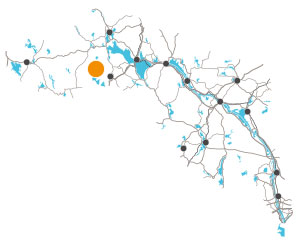 In 1973, Dan Andersson’s great grandfather, Mats Pålson, built a “Finnish cottage”, which had a stove, and a hatch in the roof to let the smoke out. It was situated on the boundary of the parish of Ljusnarberg. He later converted the Finnish cottage into a “Swedish” one, by installing a proper chimney and a window.

Anna Stina Knas, the poet’s grandmother, lived in this crofter’s cottage. She was widowed early on, with five small children to look after, and earned a living by working all day for local farmers. One of her children, who was born here in 1854, was Adolf Andersson, father of Dan Andersson.

But Dan Andersson’s grandmother became embroiled in a dispute with the Björnhyttan ironworks, which ended in her losing her land, as she could not produce any valid document to prove her ownership. Consequently, the cottage was sold in 1890 and became occupied by a widow, Anna Stina Person, who continued to live there until her death in 1935—the last person to inhabit the cottage.

Dan Andersson spent much of his time in the district. For a while he lived away and worked in a factory, and in one of his poems he wrote how much he longed to return to the valley at Pajso, and to the green meadow not far from the cottage.

At Finngården Rikkenstorp, a community close to Bränntjärnstorpet, there is a Finnish museum which you can visit. From the main museum, a footpath leads to Bränntjärn, where those who speak Swedish can enjoy reading Andersson’s poems, and empathizing with the special magic which seems to flow there.