The Fagersta ironworks community from the 1950’s. 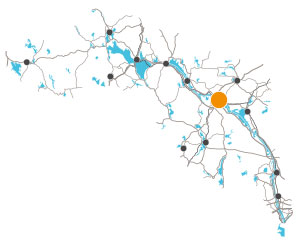 Since the Middle Ages iron has been produced here. As time went on the large Fagersta ronworks developed. In the early 1900s the existence of an ironworker´s family was entirely in the hands of the ironmaster.

At the beginning of the 19th century some workers´dewellings were built and the workers could get favourable loans to built there own homes. Fagersta was being split up with the workers on one side of the industrial area. “The opposite side” was for salaried employees and managing directors

The community grew and in 1944 it became the “borough of Fagersta. In the 1950s central Fagersta was founded, a visionary ideal community. Ironworks communities like Fagersta are typical for Bergslagen. They have developed through centuries of life in the ironworks environment and contributed to the formation of the Swedish Welfare State.

A walk from the Skansen workman´s dwellings through Fagersta centre and across to the residential district is a walk through the ironworks community – and perhaps the Swedish community of the 20th century.