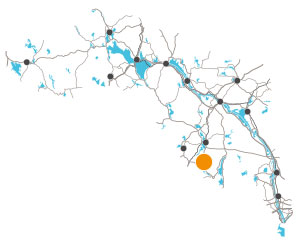 Opening times:
Self-guided tour in the area. The manor
is privat owned. Galleri Astley is located in the old settings. Open all year round, daily 10am-6pm, Sat-Sun to 5pm. Sculpture park, art museum, graphic art with workshop, café.
Jazzconcert in beginning of Aug every year.
+46 (0)222-321 20 or 320 44
www.galleriastley.com
The tourist office +46 (0)222-450 45
Info Skinnskatteberg tourism.

Uttersberg is named after Utterclou, an iron master in the 17th century, and not after some fishing mammal living by the river Hedströmmen.

At least a hundred years before Utterclou, the site by the splashing rapids was used for iron making. As time went on an iron works started, to be developed and modernized by various iron masters. As a consequence of the recession after the First World War it was finally shut down. Uttersberg was then a modern iron works. Today only the Manor House – privately owned – and some workers dwellings still stand.

In 1866 the railway reached Uttersberg and later on built out. As a result of some misunderstandings when the first engines were ordered, the tracks have a unique gauge. The last passenger train left in 1952 and sixteen years later the cargo traffic stopped.

At the former station area there now is an art gallery and a sculpture park. There is also a nature reserve for an unusual reason – an acoustic park.