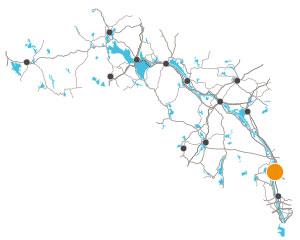 Skantzen at Hallstahammar is at the head of the Strömsholm canal, where there are twin locks. A short distance away is the Canal museum (Kanalmuseet). Several of the buildings here are cared for by the local heritage association.

At one time, Skantzen was the administrative centre for the canal and the home of the Chief Engineer, whose Latin title was Mekanikus. He had some 30 employees under him, about half of whom were lock-keepers.

The home of Mekanikus, which was built c.1790, also included a large farm, workers’ cottages, stables and workshops. Most of these buildings now belong to the Canal museum which, augmented by various collections and events, provides an all-round picture of life on and around the canal.

The development of the canal, from the beginning of the construction work in the 18th century up to the present time, can all be seen in the Canal office and the adjacent building. Here, for instance, is a model of the twin locks and of boats on the canal.

On the eastern bank of the canal stands the old inn, which dates back to 1830. It was converted into flats when the canal was rebuilt in the mid-1800s. Today the building is home to a number of small museums, including a school and a workers’ cottage from the early 19th century.

The artificial Skantzen lake was built to serve as a reservoir for the canal. The canal’s old archive building at the top of the hill has now been converted into a chapel. All the utility buildings have been taken into the care of the Canal museum, which also has a selection of tools and equipment on display, together with a carriage museum. The old coachman’s cottage has also been preserved as a museum piece.

The museum runs a café during the summer which serves home-made bread and sandwiches. A new Visitors’ centre, complete with a café serving lunches, was opened in 2005.