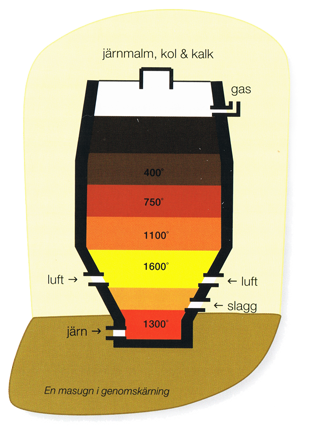 First, the pieces of iron ore had to be roasted in the roasting furnace to remove impurities. Then the iron ore was transported to the blast furnace, where it was melted using charcoal and a little lime.

A lot of charcoal was needed to make iron. The inside of the furnace was so hot that the pieces of iron ore melted and trickled down to the bottom. Large bellows blew air into the furnace through holes, and made it even hotter. The molten slag from the ore ended up on top of the molten iron in the bottom of the furnace.

The iron flowed straight into square moulds that had been made in the sand, and was allowed to cool. Now blocks of iron, or pig iron as it was called, had been made. Pig iron was also called cast iron.