How was iron ore taken from the mountain rock? 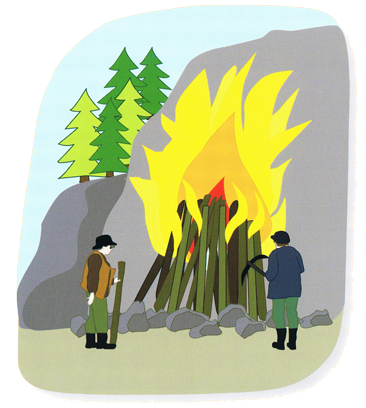 If you start a large wood fire against a rock it becomes hot and brittle, and pieces of rock come off easily. This is called fire-setting. That’s why fire was used when the people wanted to mine ore. Levers and wedges were their tools. The ore was then broken into smaller pieces, which were put in a barrel and taken away.

If you had a deep mine shaft which didn’t take in that much water, you could make underground passages in the mountain. These passages are called galleries. Sometimes, they were so narrow and low that you had to crouch down, otherwise you would hit your head. Poor miners, who had to work in those galleries. Sometimes they had to crawl on all fours. And it was dark. They only had torches with them. It was smoky and probably difficult to breathe.

In the 18th century, the wood fires stopped, and instead, gunpowder was used to blast off the ore. First, a hole had to be drilled in the rock by hand. One miner would hold the drill and two others would hit it with a sledgehammer, while the drill was being turned. This took time. Then they stuffed gunpowder into the hole and lit it. Bang!! Large chunks of the mountain rock came off. 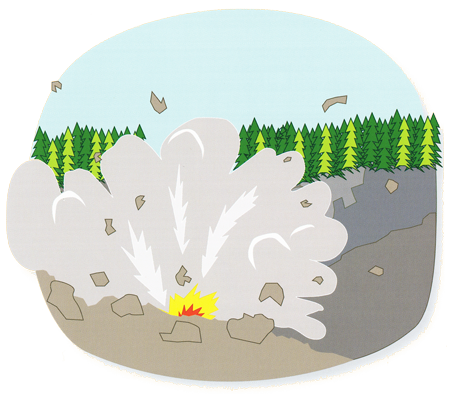 Then Alfred Nobel invented dynamite! You’ve probably heard of the Nobel Prize? Dynamite cartridges were put in the drilled holes. A dynamite cartridge looked like a sausage and had a firing string – a fuse cord – on the end. You would set fire to the fuse and after a while, the dynamite exploded and blasted the rock. BANG!! Dynamite was much more powerful than gunpowder. Now the mines became much deeper and the miners could blast their way forward, further and further into the mountain.

Bucking
When the pieces of iron ore were brought up from the mine, everything had to be sorted properly. The people soon learned that all stones didn’t contain iron, and those had to be removed. Large stones had to be broken into smaller ones with a sledgehammer. Stones with iron were put in one place, and those which were just granite in another. This was done next to the mine, and called bucking. Often, it was the women and children who did this. But it wasn’t always easy for the children, because the sledgehammers were very heavy.

When the bucking was finished, everything was loaded onto horse carts, and the horses pulled the iron ore to the foundry, also called ironworks, which had a roasting furnace and a blast furnace. This is where the iron was made. What happened to all the granite? Well, it was called slag and stacked in huge piles next to the mine. These piles were called slag heaps.