Lisjö and Larsansjö ironworks had their heyday in the 18th century. Pig iron was fetched from the foundries around Smedjebacken, Fagersta and Norberg. The heavy transports were mainly handled by crofters at Lisjö manor, using horses and oxen in winter.

The blacksmiths made scythes, axes, horseshoes, oxshoes, nails, fittings and many other items. Trains along the railway Lisjöbanan ran between Lisjö ironworks and Surahammar. In 1795, iron master Warner Groen built a church for the workers. The building, which is what remains from the time of iron production, also housed seven blacksmiths’ dwellings with kitchen and chamber. On weekdays, the upstairs of the church was used as a classroom.

In 1880, the church was handed over to Sura parish, which had it refurbished in 1925. The grand re-opening ceremony was held by bishop Einar Billing. The bell tower was built in 1928. 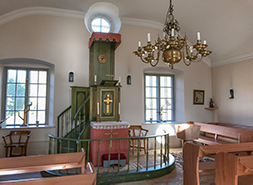 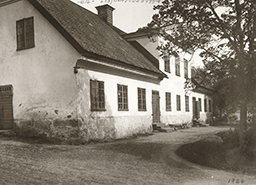